A ravaging, late winter storm with the fiercest of winds came along battering and breaking two of my favorite bird feeders. From the place in the sun room where I sit most mornings reading my devotionals and watching the different array of birds feeding, I felt a sudden void. The feeders had to be trashed, and before I could replace them, I watched the birds aimlessly peck at the ground and fly around the empty place they used to feed. Then they seemed to disappear. 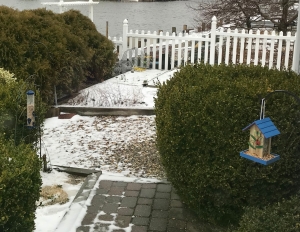 Over a week went by before I was able to replace them, but by then the birds seemed to have left town.  I watched the two new colorful feeders from my chair, but the birds were nowhere to be seen.  Maybe they had flown the coop, taking a different route to new places and formed an attachment to a feeder far away. Since watching the birds each morning was very calming and soothing to me, I missed seeing the little sparrows, blue jays, Cardinals, doves and finches frolicking around and having their fill.

A few days went by, then a week and more without a sign of any of my feathered friends. The pretty little feeders, filled to the brim with sunflower seed, millet, corn and safflower stood vacant. Were the birds afraid of the new ones?  Had they left for greener pastures? All of this was laid before them, and all they had to do was feast. But they were nowhere to be found.

Then early one morning I looked out and saw a lone sparrow bravely perching on the new feeder.  Before too long another then another flocked nearby and before you knew it, we were back in business. I was finally able to sit back and enjoy the antics of my feathered friends. 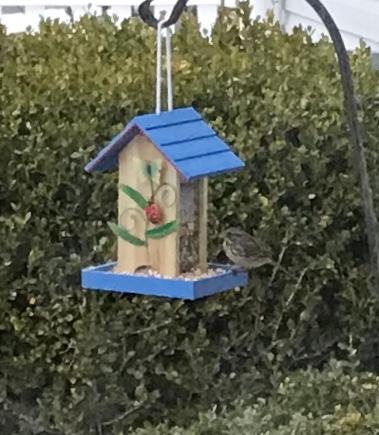 Metaphorically, I couldn’t help but think of the times that opportunities were unknowingly set before me. Full and welcoming and just waiting for me to take that brave leap to try something new, however scary it might have seemed at first. But for one reason or another, I chose to be afraid and apprehensive and decided to disappear to somewhere else, to a different venue that was maybe not as uneasy or causing so much angst. Something more familiar than this something new I wasn’t sure of. If only I had been more courageous, then maybe I wouldn’t have settled for less, missing the feast that was set before me. And in retrospect, I’ve decided to be stronger and more watchful of new circumstances that may come my way under the guise of something unknown or obscure.

…and all of this pondering caused by a tiny bird who chose to be fearless enough to try a new feeder.