My youngest daughter Megan is getting married this week!  I’m getting butterflies even thinking about how joyous a time this is going to be.

Megan and Matt have had a wonderful journey together so far.  They were not “a love at first sight” couple.  They met through a college friend Jenn and “hung out” with a group of friends for a while. Then I think they kind of lost touch.  When their college years were coming to a close, Megan went with Jenn to Matt’s graduation party at his house and that’s where their real

When Megan and Matt began dating, our family lived in the rural area of Upper Bucks County, PA.  Matt and his family lived near Atlantic City.  They had kind of a long-distance romance…he would travel and spend a weekend here, and then she would travel and spend a weekend there.  I don’t think it was easy for them since it was a good 2 ½ to 3 hour commute.

I remember at the beginning of all this that Megan came down with a terrible cold/flu thing which rendered her bedridden. She and Matt were talking on the phone that night and then they hung up and she fell asleep.  Well, 3 hours later there was a knock at the door and there stood Matt with a quart of chicken noodle soup for Meg.  That’s the moment I knew he was the one for her. Traveling three hours on a work night to bring your sick girlfriend a quart of chicken noodle soup….now that’s love.

Their romance has had its ups and downs like everyone else’s.  Good times; bad times.  They relocated to Florida four years ago, got a cat, bought a house, got a dog.  They’ve built a wonderful life for themselves and have weathered many storms.

So now they’re making the commitment to each other to have and to hold, for better for worse, for richer for poorer, in sickness and in health, to love and to cherish, till death they do part.  I know for sure that Matt has the “in sickness” part down! And Megan is one lucky girl to have someone so thoughtful and kind.

My heart bursts with pride for Megan and all she’s become in living her life her way.  She’s grown into a fine young woman. I’m happy that she still believes in love despite some twists and turns that have crossed her path.  And I’m glad that I’m finally going to have a wonderful new son!  My cup is literally running over with happiness and joy.

So, here’s to Megan and Matt and to your happily ever after! Fairy tales do come true.

Wishing you all of God’s bountiful blessings…Love, Mom 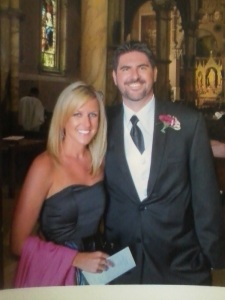