Last year at this time there were a lot of boarded-up homes around here, making it resemble a movie set for a haunted Halloween production. But it wasn’t a movie set…it was real.  The skies were dark.  The clouds were brewing. 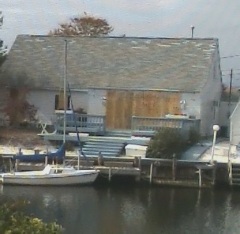 Last year I would often take my dog Bella down to the end of the next block to walk around a mini-park and relax peacefully in a gazebo peering out over the calming waters of the Barnegat Bay. 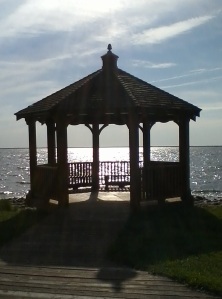 Last year I was nervous and stressed out, wondering where I would go when I evacuated…how I would pack up my pets and what I would do if when I returned, the place I called home was no more.

Last year the threat of Sandy hung heavy in the air.

This year there are no boarded-up homes. The sun is shining.  The weather is still warmish. The park where I took Bella?  Destroyed.  The gazebo? Gone…washed out to sea.  Some people have left that area…others are rebuilding.  Today I have a place to call home, and my pets lounge and snooze comfortably around me. So many others…not so much.

I stopped by a Jersey shore town last weekend and took a ride down a street that led to the bay.  I caught my breath at what the area still looks like.  So many abandoned homes. Neighborhoods in ruin. Temporary trailer parks filled to capacity.  Homes boarded up.  It looked like, again, the movie set for a haunted Halloween production.  But it was real.  It sent chills down my spine to think that for so many people it’s still not over.  And although the sun is shining, it’s still dim and grim. It’s still a battleground.

As the anniversary date approaches of the hit of Sandy on the Jersey shore, I can’t help but to reflect on how different life was just a year ago at this time.  And how many changes have occurred since then…how many things have been destroyed, how many people are still suffering. It makes you sad and mad all at the same time.  I can’t imagine how the people in the flux of it all cope. But it is the bravery of these wounded warriors that I keep forefront in my remembrance of this horrible tragedy.  The tenacity in their persistence to rebuild.  To stay.  To not let this ugly event destroy them, even though so much of what they had was.  Their strength.  Their dexterity.  All the words in the vocabulary that mean tough and brave and admirable. That’s what these Jerseyans are.

They call Sandy a super storm, but she doesn’t deserve the adjective “super.” There was nothing “super” about it except the super mess it left in its wake.  Sandy just blows.

What is super?  The people of New Jersey…their super hearts, their super souls, their super “up yours” attitude that keeps them tough and strong in the face of adversity. That’s the definition of super. Thumbs up to these super heroes!