I’m watching the couple across the lagoon where I live as they sit in the backyard and rock on a swing built for two.  I have a bird’s eye 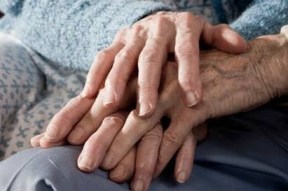 view and am feeling a little voyeuristic as I observe them, but from where I’m sitting in the sunroom, it’s hard to ignore them. They turn their faces upward toward the sun as a gentle breeze ruffles their hair – or what’s left of it.  I don’t know their whole story, but I do know she owns the house on the corner and he lives next door. His wife died, then her husband and somehow they became a couple. I’ve seen them going back and forth between the houses. Their children are grown and visit now and then, especially during the summer.

They’re very playful at the moment.  He leans over and gives her a kiss, then another.  He sits back with his hands behind his neck looking up at the sky smiling, and then lets one arm drop around her shoulder pulling her in for a hug.  They are animatedly chatting about something and are pointing at things around the yard. He leans over and starts tickling her, and she is playfully pushing him away. They are giggling.  He leans in for another kiss (boy, he’s frisky for an old goat!)  and then they get up from the swing and walk between the houses holding hands until they disappear around the corner.

It’s so heart warming to see older folks in love. It gives you hope that no matter what you’ve been through, it’s never too late to try again.  Getting older doesn’t mean you have to give up on love.  You can still be optimistic that you’ll find that special someone who will make you giggle as you rock on a swing on a warm spring day and feel glad to be alive.